On behalf of the world's wild species

Comments Off on Using Citizen Science To Conserve The Wolverine Posted by wildtracks on January 27, 2012

You should know now that wolverines will be featured often on this blog. The animal wolverine, not the one with the metal blades in his hands.

These almost-mythical, cantankerous denizens of the deep boreal forest are my favorite carnivore. My Wild Carnivore website has been sending a percentage of proceeds from the sale of my wolverine t shirt to The Wolverine Foundation since I started the site. I have books, videos and scientific papers on wolverines. If you’re reading this blog, get ready for wolverines.

The Alberta Conservation Association is working on a field research project using non-scientists to gather data:

Project goals: to engage non-scientists in conservation actions through participating in the collection of information on a data-deficient species; to protect key wilderness areas in the face of expanding human pressures and a changing climate; to increase the public’s understanding of the importance of intact wilderness to the Canadian identity

The wolverine is an icon of Canadian wilderness. They are most commonly associated with areas where human disturbance is low, but we know relatively little about why this is or what future development and climate change might mean to this species. They will battle a grizzly bear for food, but will they be able to take on industrial development or changing snow conditions? Volunteers and citizen science can help us find out. For this project, volunteers from the Alberta Trappers’ Association will participate in a unique initiative by collecting information on where wolverines live, the type of habitat that is important, and the obstacles they face in an uncertain future. Trappers, who wish to protect wilderness for future generations, will identify wolverine tracks and monitor remote camera stations. The non-invasive (live) collection of hair samples from hair snag stations will provide DNA. Alberta Conservation Association (ACA) biologists will use these pieces of information to assess habitat occupancy and population size. Habitat change modelling predictions and location information from collared wolverines will be incorporated into our online communication to show the size of area and habitat features that need to be protected for wolverine populations to remain healthy. This will be part of an education campaign to engage the public in protecting key wilderness areas. ACA will ensure that volunteer-produced information is collected consistently and accurately. This will enable us to combine the best on-the-ground knowledge with scientific data to produce results that will be accepted and understood by a wide audience.

The latest Project Update reveals how they managed to capture DNA samples by clipping some hair from a male wolverine. Not the usual method, but it appears to be effective! Check their rare photographs of a wild wolverine.

The Week In Carnivores #13

Comments Off on The Week In Carnivores #13 Posted by wildtracks on August 13, 2010

This is a weekly roundup of news items featuring the wild carnivores of the world. If you miss the news during the week, check our blog on Fridays!

Comments Off on Meet The Carnivore #4 Posted by wildtracks on May 17, 2010
Our Friday mystery creature was a Zorilla (Ictonyx striatus) 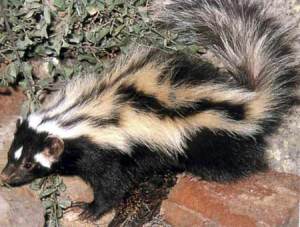 The Zorilla, also called a Striped Polecat or African Polecat is a member of the Mustelidae family, and really does resemble a skunk. The animal is mainly black but has four prominent white stripes running from the head, along the back to the tail. The Striped Polecat is typically 60 centimeters long including a 20-centimeter tail.

Striped polecats are found throughout the African continent. They are distributed in all habitats occurring between the Mauritanian coast and the coast of Sudan, and southward to the South African coast.

Zorillas are almost strictly nocturnal, but some have been seen foraging around dusk and dawn. They seem to lead fairly nomadic lives, and sleep in hollow trees and rock crevices. They may also dig burrows or cover themselves with twigs and leaves when other suitable sleeping places are not present.

Although polecats are efficient swimmers and climbers, they prefer the terrestrial life. When foraging, a zorilla will walk or run with its backs held in a firm arch and its tail in the vertical position with the tip bent down. This loping gate is something like that of a mongoose.

Very little is known about the social life of wild zorillas, and they appear to be mainly solitary. In captivity, but several families have been kept together and grooming appears to be common among them. Some will roll over and present their dark undersides for grooming. Even though large numbers are seldom encountered together in the wild, their captive behavior suggests that they may not be highly territorial.

The Striped Polecat is solitary, tolerating contact with others only to mate. Young are generally born between September and December, with one to three young per litter.